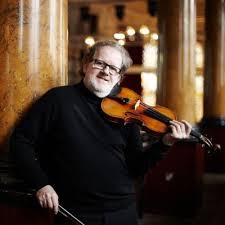 of the Vanbrugh String Quartet

Keith Pascoe is a musician and conductor from Liverpool, England, best known for his work with musical ensembles such as the Chamber Orchestra of Europe, the London Philharmonic, and the RTÉ Vanbrugh String Quartet. Keith studied violin, piano and conducting at the Royal College of Music in London. He holds first-class honours degrees (MA and Master of Philosophy) from both CIT and UCC respectively, and received an Hon. ARAM from the Royal Academy of Music in London. He currently lives in Cork, Ireland. Keith's professional life began in 1981, when he became a founding member (and leader) of the Chamber Orchestra of Europe. Subsequent full-time positions included sub-leader of the London Philharmonic at the age of twenty-three, assistant director of the Academy of St. Martin in the Fields (with whom he has appeared as soloist), and ten years with exclusive EMI artists, the Britten Quartet. Since 1998, Pascoe has been a violinist with the Vanbrugh Quartet and has been artists in resident to University College Cork.